You can download the PressKit with logos and press release both in Italian and English.

Given the rising importance of Javascript both in the development of web applications and as an all-purpose language, the italian PHP user group GrUSP decided in 2010 to organize a conference fully dedicated to Javascript, alongside the traditional phpDay conference. Much beyond any expectation, each edition has been incredibly successful, with over 300 visitors coming from all around Europe and sponsorship from big corporations and organizations, like Microsoft, Mozilla, Yahoo!, Opera and Sencha.

Steve Souders (Google), Kyle Simpson (Mozilla), James Pearce (Sencha Touch, Facebook), Robert Nyman (Mozilla), Patrick Lauke (Opera) and many more. You can take a look at the videos of past talks at http://vimeo.com/grusp.

The 2013 edition of the jsDay will be held in Verona on May 16h-17th. The call for papers will close on February 28th and we are still accepting submissions at: http://2013.jsday.it/call-for-papers/.

Event tickets are available, http://2013.jsday.it/tickets/.
Please visit http://www.jsday.it/ for more information and/or our Facebook and Twitter accounts if you want to keep in touch and hear the latest news: https://www.facebook.com/jsday.conference and http://twitter.com/jsconfit.

Since ten years, phpDay is the yearly gathering of the italian and european PHP communities.

The event features two days full of talks and workshops held by both national and international speakers about the PHP programming language and its own ecosystem. It also offers a very interesting chance to meet gurus, managers, developers and innovators from all over the world.

The phpDay massively evolved over time: it started as a conference aimed to italian amateur and professional developers and is now become one of the most important european PHP events. The past speakers list include Zeev Suraski (Zend), Rasmus Ledorf (creator of PHP), Fabien Potencier (Symfony), Johnathan Wage (Doctrine), Enrico Zimuel (Zend Framework), Sebastian Bergmann (PHPUnit), Dustin Whittle (Yahoo, Symfony), Scott Chacon (github) and many more. You can take a look at the past talks videos on http://vimeo.com/grusp.

The 2013 edition of the phpDay will be held in Verona on May 17th-18th. The main topic this year is going to be the core language itself so you will find updates about the forthcoming PHP version, its new features and improvements. Among other topics there will be success cases, development methodologies and the code quality improvement they can bring (TDD, Continuous Integration, etc.), best practices, project management, framework and libraries and more.

The call for papers will close on February 28th and we are still accepting submissions at: http://2013.phpday.it/call-for-papers/.

Event tickets are available, http://2013.phpday.it/tickets/.
Please visit http://www.phpday.it/ for more information and/or our Facebook and Twitter accounts if you want to keep in touch and hear the latest news:
http://qrurl.it/r/5g e http://twitter.com/phpday. 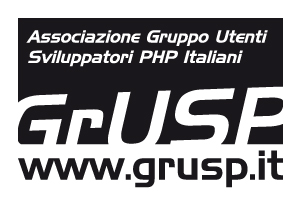 The italian PHP user group GrUSP (Gruppo Utenti e Sviluppatori PHP – www.grusp.org) was born in the last months 2003 and was officially launched during the second edition of the phpDay conference in 2004. Since then it has always tried to fullfil its goal, spreading the knowledge of PHP, its features and benefits to the italian IT community and contributing to its shift from being only an amateur scripting language to an enterprise-ready programming language.

GrUSP has grown over the years up to the current 300 subscribers, and it is now one of the biggest european PHP user groups. Its activities also include helping the creation of smaller local PUGs, translations, writing books and supporting initiatives and events of other italian web development communities.

GrUSP is organizing the yearly international events phpDay and jsDay, that attract many people and companies coming from Italy, Europe and, recently, even from the United States and Canada.